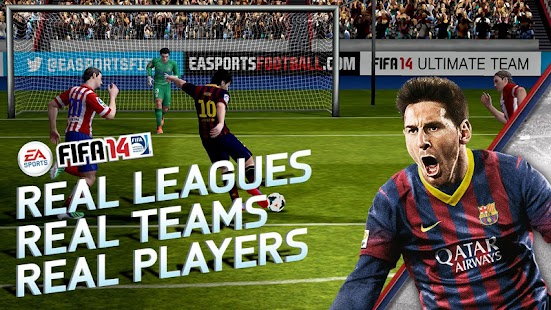 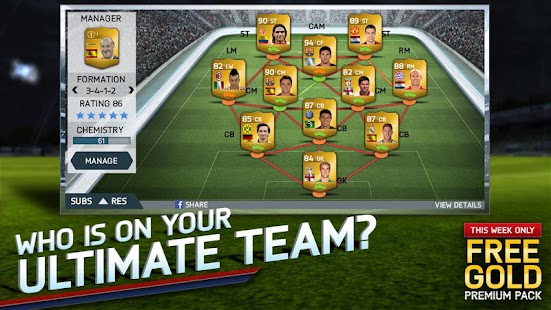 REAL PLAYERS. REAL TEAMS. REAL LEAGUES. Welcome to the most authentic football game for Android smartphones and tablets. Feel the excitement of every pass, shot, and tackle with new touch controls. Plus, live every moment of real-world football mastery with EA SPORTS™ Football Club Match Day. Get in there with FIFA 14!
** This game has superior graphics and is packed with tons of real football leagues, teams, and players. Please make sure you have at least 1.35GB of free space on your device. **
FEEL THE PASSION
Featuring 33 leagues, over 600 licensed teams, and more than 16,000 players. From the English Premier League and La Liga to the German Bundesliga and beyond. March toward glory in 34 authentic stadiums. Plus, for the first time on mobile, listen to commentaries in English, French, German, Italian and Spanish!
MATCH DAY MADNESS
EA SPORTS™ Football Club Match Day lets you follow the heartbeat of your favorite club. Play along with real-world fixtures from top leagues. Every injury, suspension, and change in team form is reflected in-game – keeping you connected wherever you are!
BUILD YOUR ULTIMATE TEAM
Earn and trade, or buy and sell FIFA players to create your own fantasy team. Choose your play style, formation, kits, and more. Compete in tournaments to earn coins, then spend them on new players and items to improve your team. Play for free or purchase packs. The choices are endless!
INUITIVE NEW TOUCH CONTROLS
Hold and drag players to move them around the field, tap to pass, swipe to shoot – and more! FIFA 14’s new Touch Flow Controls put the excitement of playing the world’s most popular sport at your fingertips – literally.
ROCK OUT – FIFA STYLE
Featuring a killer soundtrack with the hottest artists, from Empire of the Sun to Vampire Weekend. It’s an epic playlist only FIFA can bring you!
FIFA FANATICS!
Want more? Classic modes like Manager, Tournament, and Kick Off are available for purchase in-game.
The game you love. The game you live for. WE ARE FIFA 14!
FIFA 14 is playable in English, French, Italian, German, Spanish, Japanese, Chinese, Korean, Dutch, Russian, and Brazilian Portuguese. Hit the pitch around the world!

The Plus Addons for Elementor - Most Populars Addon For Elementor
This addon is made for Elementor, Which have included all best elementor addons which are crafted for innovation and creativity. It has most amazing customization options available which make this addon an ultimate elementor addon. We have created each and every widget with the utmost attention...

AdAway - Ad-blocking for your Android
Features AdAway is Open Source and Free Software (GPLv3+) AdAway lets you select your own sources of hosts files You can add exceptions to your Whitelist if an app is not working when specific hosts are blocked *You can define extra hostnames in your own Blacklist You can add your own...

Enfold - Responsive Multi-Purpose Theme
Enfold is a clean, super flexible and fully responsive WordPress Theme (try resizing your browser), suited for business websites, shop websites, and users who want to showcase their work on a neat portfolio site. The Theme is built on top of the fabulous Avia Framework and offers support for the...